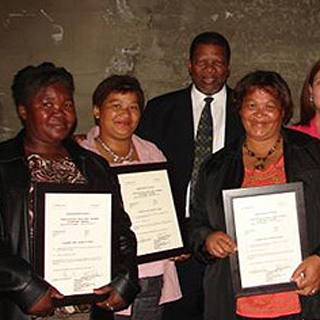 This initiative empowers particularly the women on Robertson Winery’s member farms. To this end, 183 permanent employees were selected from member farms to form 3 trusts according to their geographic location in the Robertson Valley. Directors were appointed from amongst themselves to serve on the board of their company, Constitution Wine Growers, of which they own 66% and Robertson Winery owns 33%. As a member of Robertson Winery we are thrilled that this Land Reform Initiative is functioning well and that 6 of our staff are shareholders in this BEE company.

With skills transfer identified as a vital component to assist the women in running their company and to make informed business decisions, Robertson Winery  undertook a holistic training programme together with WineTech. The skills development programmes cover everything from viticultural practices to financial management.

The company purchased a farm in one of the Breede Valley’s choice wine producing areas, appointed a manager and staff, and it now operates as a fully fledged member of Robertson Winery. Under Briaan Stipp’s guidance a replanting programme is in progress and in addition to the existing vineyards of Shiraz, Cabernet, Merlot and Chardonnay, an additional 10 hectares of Cabernet Sauvignon have been planted. These grapes are then sold to Robertson Winery with profits to go to the shareholders. The apricots on the farm are sold to the Rhodes Fruit Group who also provided funding for the planting of an additional 7 hectares of apricots. Four labourers houses have also been upgraded on the farm with a financial grant from Robertson Winery.

This initiative took several years of preparatory work and investigation to achieve a project model that would be sustainable over the long term and provide benefit to its members.  Wine farming is a capital hungry business and new vineyards only begin to show a return on investment after 4 to 5 years. Research showed that the majority of BEE farms failed due to a lack of skills training, mentorship and an inability to make provision / raise funds for capital equipment, maintenance and repair and replanting to maintain the farm as a viable business. So after years on the drawing board transfer finally took place in September 2009 and Constitution Wine Growers celebrated their first harvest in 2010.

This project’s significance was acknowledged by the Department of Land Reform and Rural Development, whose national Minister, Mr Gugile Nkwinti, was present as a guest of honour.  Minister Mr Nkwinti said that this project was a “relationship based on business and equality” and that it was important that the participants understood what it was all about; something not always the case in BEE projects.

“It’s a matter of co-ownership and co-management, with skills transfer as an important component. The workers must learn to understand not to think only in terms of cash, but also assets for long-term benefit and security. We need more models like this one. At the end of the day partnerships will count. Changing South Africa takes pain and courage like this.”

All 6 of Riverton’s Staff members completed their first level of training with 3 of the ladies being chosen on academic merit to continue with their second level of training. Mrs. T. Pietersen from Riverton was also chosen for level 3  training and as one of 5 Constitution Wine Growers members to attend the National FES workshop at the CTICC in Cape Town in November 2011.

Several topics were covered at the conference, for later discussion and identification of issues and recommendations, including: 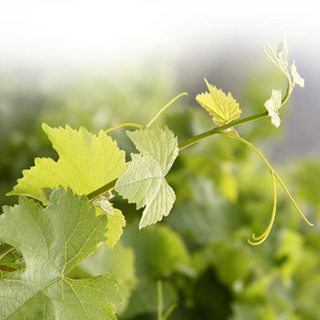 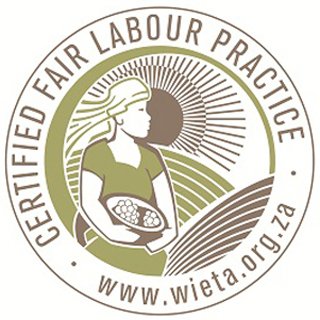 The first wines to carry South Africa’s new, fully traceable, ethical seal were released in September 2012. The Wine and Agricultural Industry Ethical Trade Association (WIETA) have announced that 26 wines from Robertson Winery, Distell, Fairview, Durbanville Hills and Spier have all been granted permission to use the WIETA ethical seal on specific bottles of wine.

This new ethical seal testifies that producers have adhered to the WIETA code which is based on the International Labour Conventions’ Ethical Trading Initiative and South African labour legislation.

This code prohibits the use of child labour, and ensures that employment is freely chosen with all employees working within a healthy and safe environment. The code also states that workers should have the right to freedom of association, a living wage and to be protected from unfair discrimination. Worker housing and tenure security rights should also be respected.

In order to carry the seal, WIETA CEO, Linda Lipparoni explained “Brand owners have to identify all their suppliers. At least 60% of these suppliers had to be WIETA accredited, with the other 40% able to demonstrate that they were preparing themselves for accreditation within a year”

Commenting on the first wines to receive the seal, Wines of South Africa CEO, Su Birch, explained “They are the trailblazers who are setting an important precedent for the industry in its efforts to fast-track the implementation of fair labour practices on wine farms and in cellars”.

In 2016 Robertson Winery was targeted by unprescedented industrial action from a trade union demanding a 150% wage increase for entry level workers during a time when the wine industry was only making a 2% profit and South Africa’s unemployment rate rose to 27.1%.

At that time unskilled entry level workers were earning R3,805 per month excluding provision for Provident Fund Contributions, bonus payments and access to free medical care. To put South African entry level jobs into perspective; many tertiary qualified students remain unemployed without being able to gain work experience. Eager to get their foot in the door they are willing to accept temporary employment as an intern earning R2000 per month if they can land the job. The sad irony of the situation was that Robertson Winery in conjunction with Vinimark had deliberately chosen not to fully mechanise their botteling operations as per international practise so as to provide additional jobs to our rural community. The protracted industrial action was eventually settled.

However, in conjunction with the industrial action the Scandanavian media were primed and a documentary called “Bitter Grapes: Slavery in the Vineyards” was aired in Sweden and Denmark. See Swedish importers response to a newspaper article published in the SvD Näringsliv. This is not the first time and will no doubt not be the last time that the media and the public are duped to further political aims in the Western Cape.

Robertson Winery views the documentary “Bitter Grapes” as a one sided and somewhat superficial depiction of the circumstances of the South African wine sector.
It is noted that the documentary chose to rely on the evidence of the officials of a single trade union which happened to be embroiled at the time in a longstanding industrial dispute over wages with Robertson Winery.

The fact that the documentary failed to seek views from unions such as FAWU, BAWUSA and Women on Farms, all of which have established reputations in the Agricultural Sector, serves only to undermine the substance of the evidence presented in the documentary.

The documentary chose to pursue the false narrative that Robertson Winery is party to payment of ‘slave wages and apartheid practices’. It was noted that the documentary chose to ignore the fact that the company has been party to the purchase and transfer of the farm Constitution Road into Trusts, 66% of which is held by up to one hundred and eighty three historically disadvantaged women who work on producer farms. We believe that this extraordinary commercial arrangement was ignored in the documentary simply because it does not promote the narrative of “slavery and apartheid”.

There is always room for improvement within the wine sector and farms and cellars that do not operate within the law should be penalised and brought to book. However it must be borne in mind that without economic growth companies and farms have to operate under financial constraints and within tight budgets to remain viable. Demanding high entry level wages for unskilled workers who generally have not had the encouragement, ambition, or wherewithal to finish their schooling is not going to encourage anyone to offer them a job. Inadequate state schooling and restrictive legislation that discourages investment and economic growth are not to the job seeker, employee or companies benefit either.

Riverton will however continue to invest in their valuable employees and their families and continue to offer training and merit based incentives.