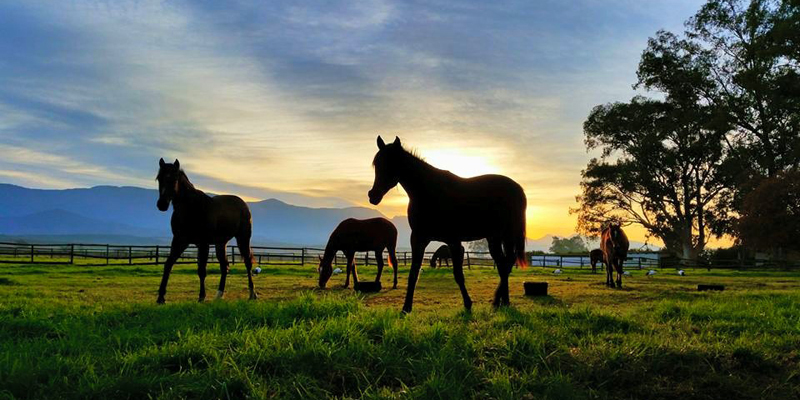 “Conservation is a state of harmony between men and land,” Aldo Leopold

As farmers we experience climate change firsthand with shifting rainfall patterns negatively impacting harvest seasons and the availability of drinking water. Reducing our environmental footprint is thus a priority to ensure the sustainability of our thriving farming community. As stewards of the land we are constantly researching innovative, cost effective and practical solutions to reach our conservation ideals.

Living in a low rainfall area (180mm to 250mm per annum) we are very aware of the need to conserve water. The availablity of clean drinking water is a priority.

– The houses and sheds on the farm all have rainwater collection tanks.
– Water quality is tested according to SABS standards on an annual basis.
– The bath and shower water from the guest house is used to irrigate the grass.
– The horse pastures are sprinkler irrigated and not flood irrigated. 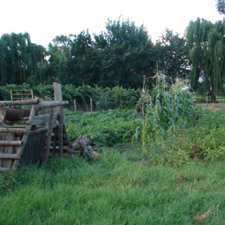 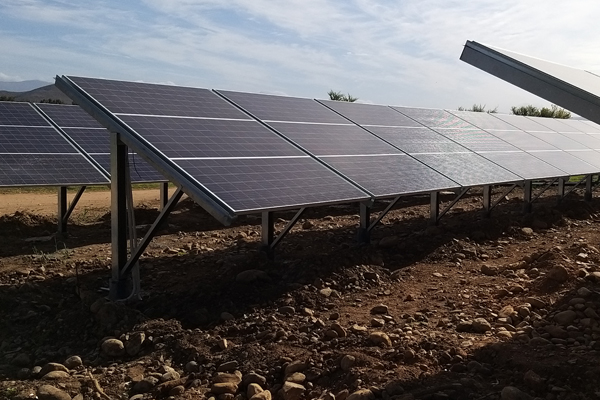 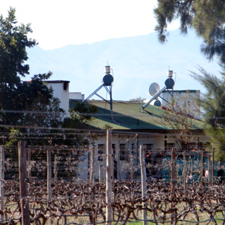 In 2007 / 2008 the Riverton staff housing and the stable office received solar energy geysers.

In tandem with using solar lights where practical an on-going policy of replacing geysers with solar energy geysers has been implemented.

We make our own compost:

Grape skins and pips that are left after the wine has been pressed and horse manure (one of the safest animal manures to use) collected from the paddocks is combined with autumn leaves and old bedding straw, turned for 3 years and our compost is ready.

Each compost heap is at least 20 meters in diameter and 2 metres high. 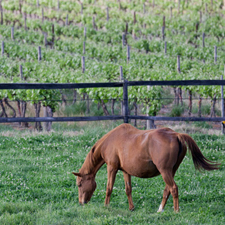 The source of supreme bone quality in our horses and the quality of our vines lies in the land.

Proper land management and crop rotation of our calcium rich soil is employed on a continuous basis at Riverton.

In our on going quest to minimise  our farm’s waste production we encourage repurposing or recycling. Used containers that are safe to repurpose become fire sand buckets or planters. Tires are remodelled into soft feed buckets for the yearlings who love playing soccer with them. Tractor tires make wonderful sandpits or swings. Potatoes planted in stacked tires provide a supply for several months.

We have a contract with a local recycling company to remove our used plastic containers, glass, tins  and so forth. Our self-catering guest house also has designated bins for our guests to recycle.

Almost two decades ago a rust fungus (Uromycladium tepperianum) that is specific to reducing the reproductive and vegetative growth of the alien Port Jackson (Acacia Saligna) trees along the Breede River was introduced. Whilst unfortunately not exterminated, the Port Jackson’s ferocious growth has been curbed to allow vegetation indigenous to our area to regain a foothold. In 2011 we also had 2 scholars chop down Port Jackson trees as part of their community service to achieve their President’s Award.

In 2007 a large number of the alien water guzzling Blue Gum (Eucalyptus) trees were professionally chopped down along our stretch of the Breede River. Our area unfortunately has very few indigenous trees and whilst the reeds quickly grew back they were no match to the ferocious growth of the Blue Gums. A single Blue Gum tree can consume up to 600 liters of water per day. More Blue Gums are scheduled to be cut down whilst we will try our best to maintain those that are home to magnificent high roosting Fish Eagles, Harrier Hawks, the Western Osprey and a host of aquatic birds.

Riverton has always been home to the most magnificent trees and it is our policy to replace fallen down trees and plant new indigenous trees on an on going basis.

Every small step can and does make a difference!

Regular audits that include environmental awareness and sustainability give us a valuable independant benchmark as to our success and of greater importance it highlights areas were we can improve.

We are registered for the Integrated Production of Wine (IPW) and passed our environmental sustainability audit in 2016 with 84%.

As with the international BSCI code of conduct which we follow we are also registered with WIETA which applies a holistic approach and not only audits that we are operating according to international health & safety standards but that our staff are managed according to all legal requirements and treated with the respect that they deserve.